Catch the latest on the blog. 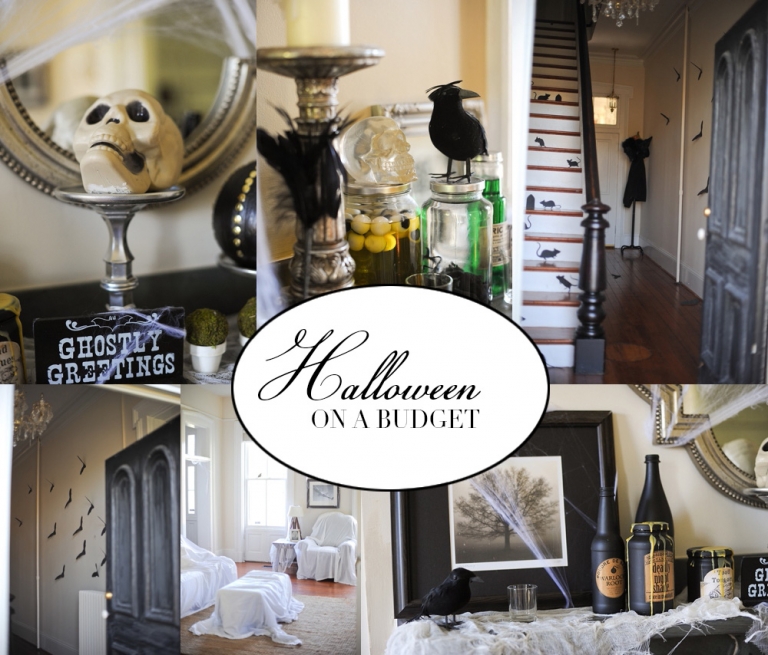 Halloween has always been one of my favorite holidays!  It’s a combination of the beautiful fall weather, the change that comes with it and spooky fun you can really only get in October.  I’ve never been a big dresser-upper, until recently, but as a kid I remember the thrill of decorating the house (with tons of spider webs) and now I get to take it even further as an adult.  Last year we had the perfect house for decorating so I went as far as my dollar and time would take me decorating (which is limited).

I wanted to share some of the photos from last year, I’m only dissapointed I didnt take many photos during the actual party because I had tons of candles lit.

I bought the mice for less then $10 at Michaels. However I cut the bats out of a template and black construction paper. 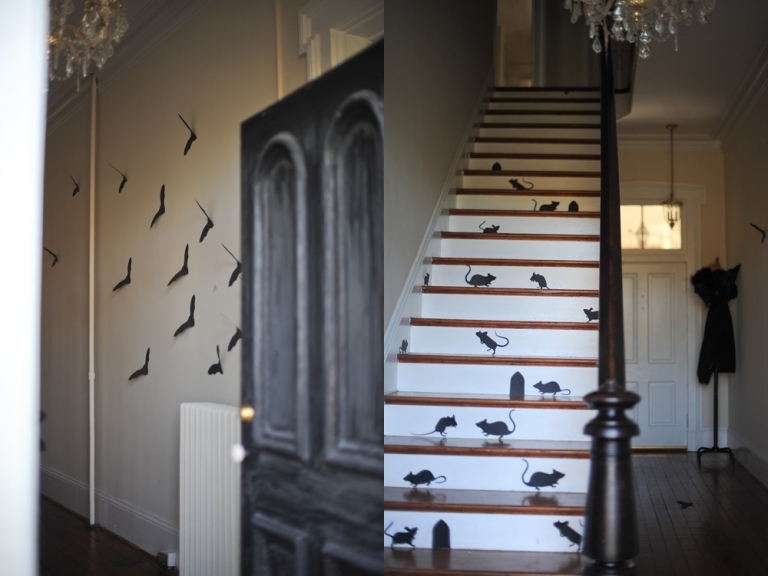 My favorite thing I made for Halloween this year were these black bottles labeled with all sorts of tinctures. I literally saved every glass bottle and jar we used the past few weeks, spray painted them matte black and pinned/printed a bunch of free halloween labels and decopauged them on.  I dripped hot candle wax on some for effect. Essentially this is  FREE, assuming you own black spray paint and modge podge, if not its a couple bucks.  You dont realize how many glass bottles you use until you need them for a project. 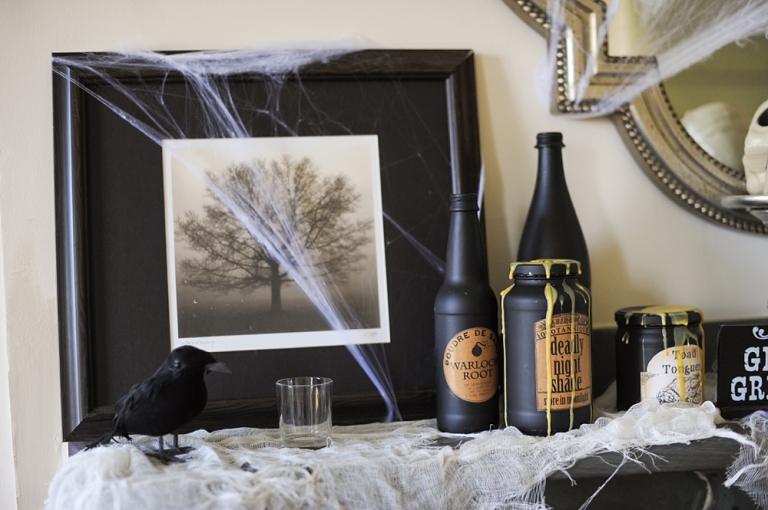 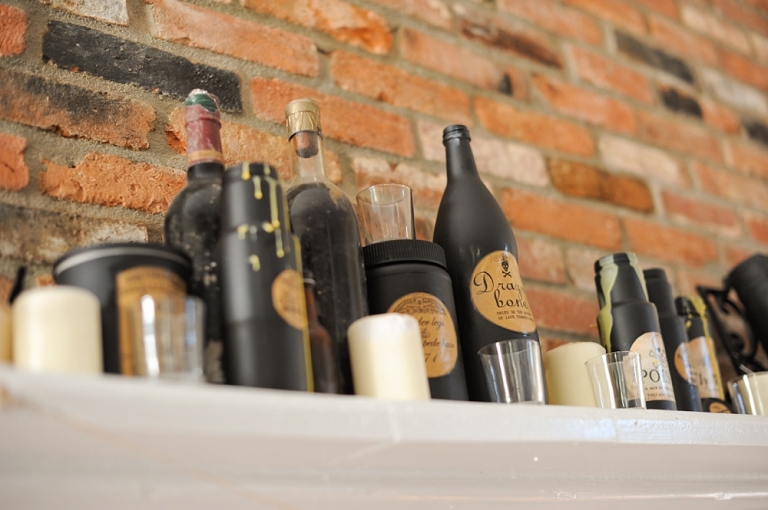 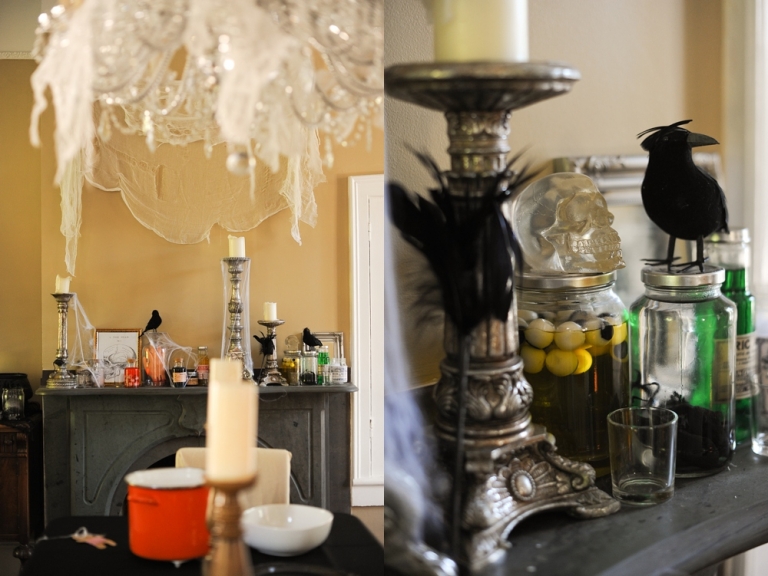 Most of these bottles were saved (left over pickle jars, pasta, starbucks, etc.), they were cleaned, I modge podged labels or left plain.  Some filled with colors water and little trinkets.  All the fillings like rubber mice, skeletons and eyes were purchased at the dollar store.

It certainly helped that we lived in a 160 year old, giant (alreay sort spooky) house (with tons of fireplace mantels to decorate). 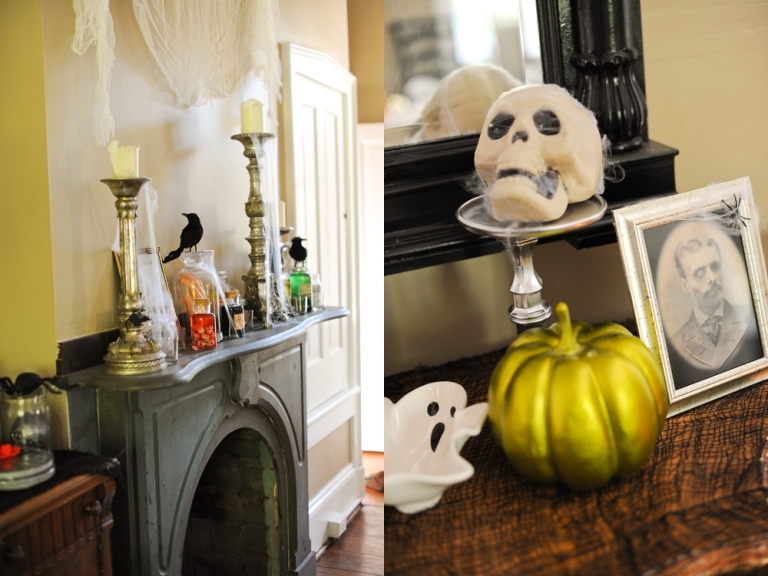 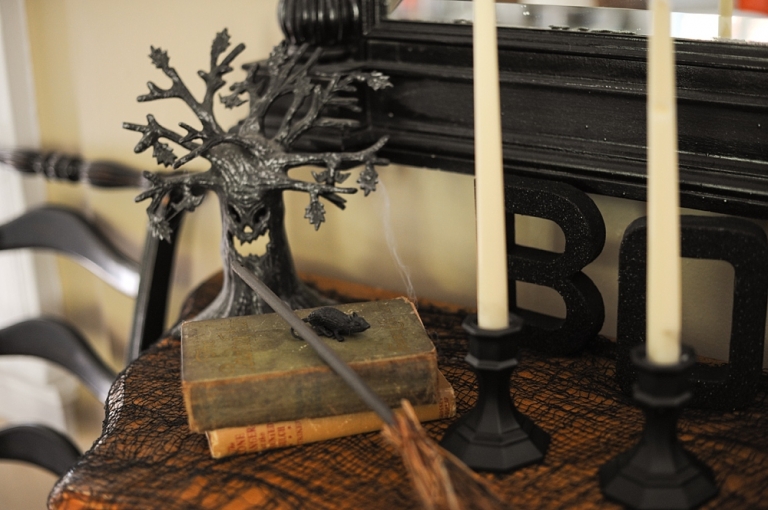 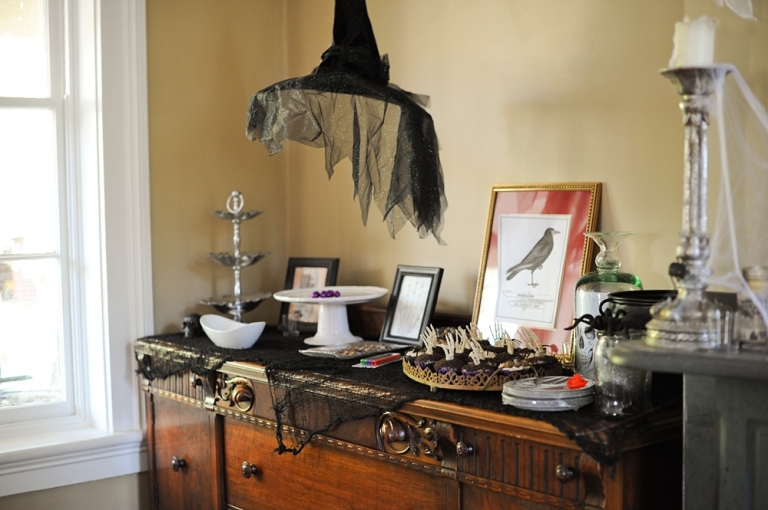 not complete without a little mad scientist 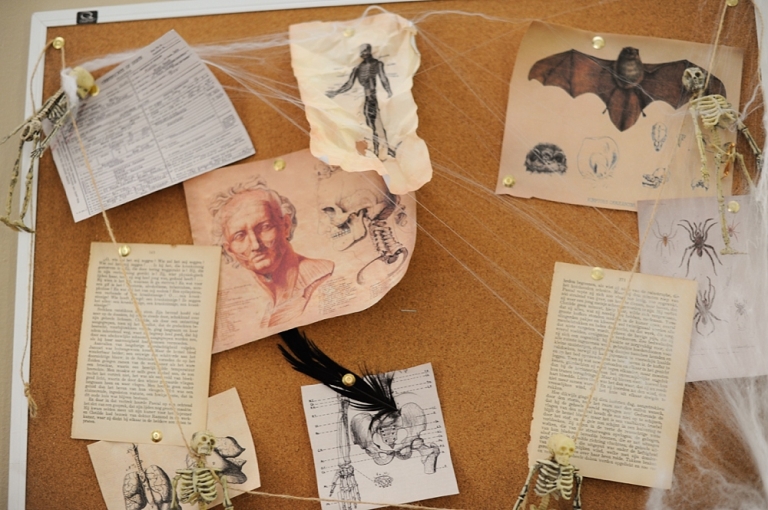 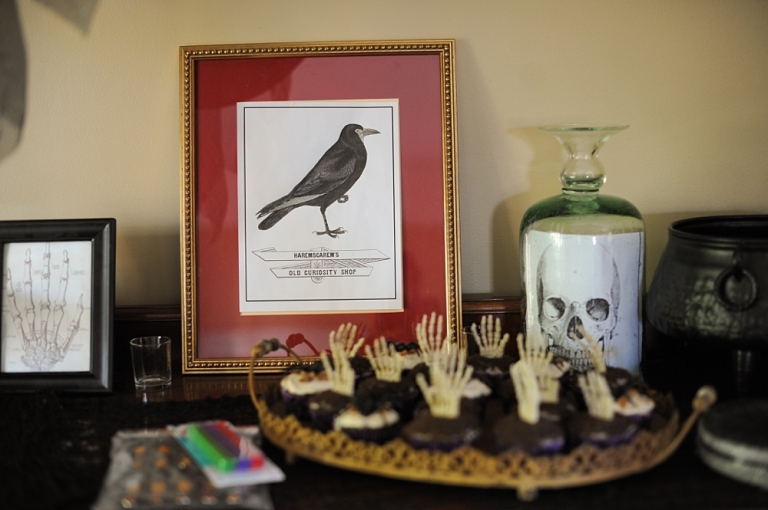 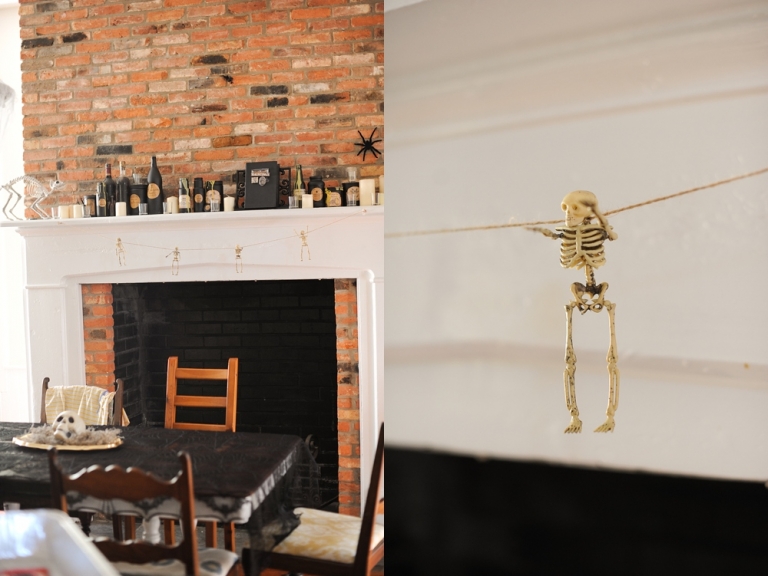 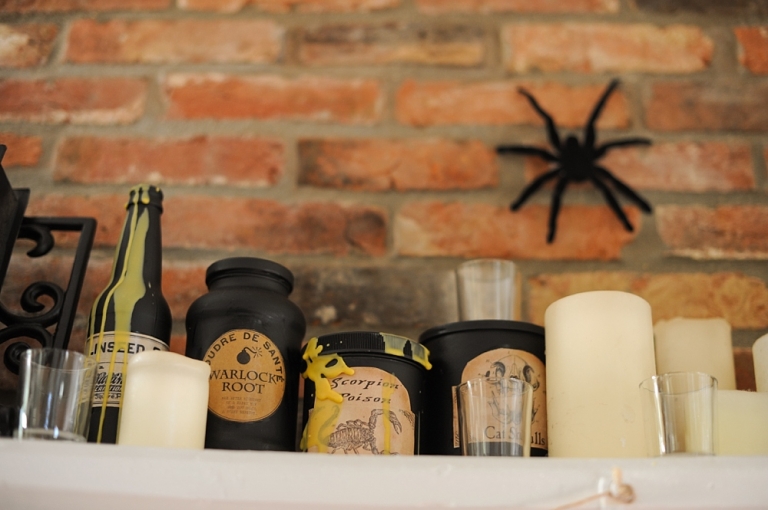 I owned some white sheets, more was purchase at Goodwill for $3-$5 each. 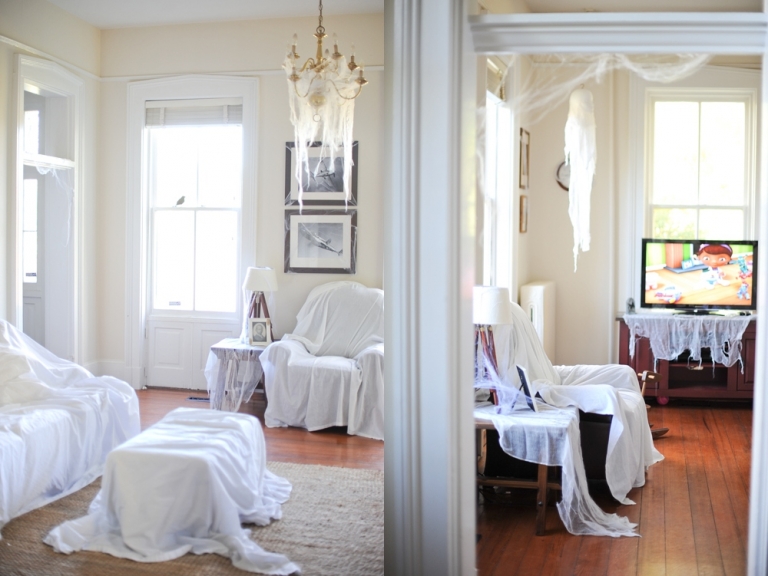 The hilarious thing about this photo is, that tape left an outline on the floor after I ripped it off (that was only visible from certain angles).  When we were selling the house I thought it might freak people out!  Note to self, use less sticky tape. 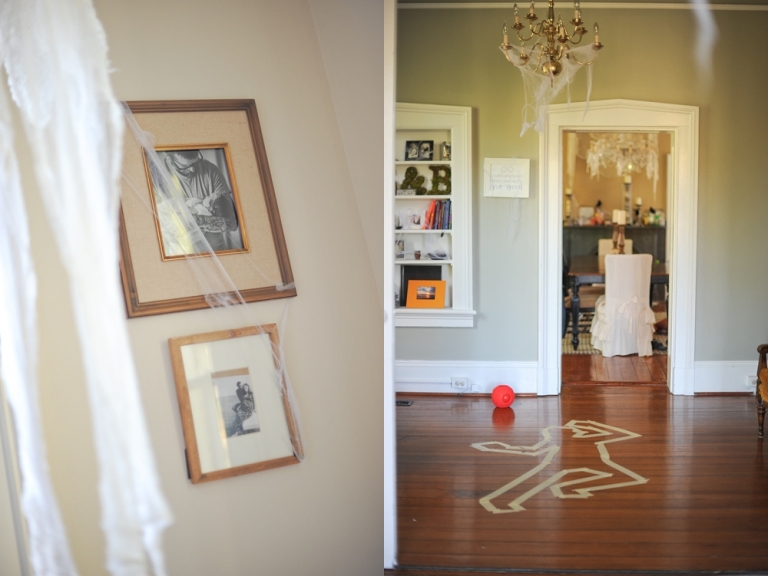 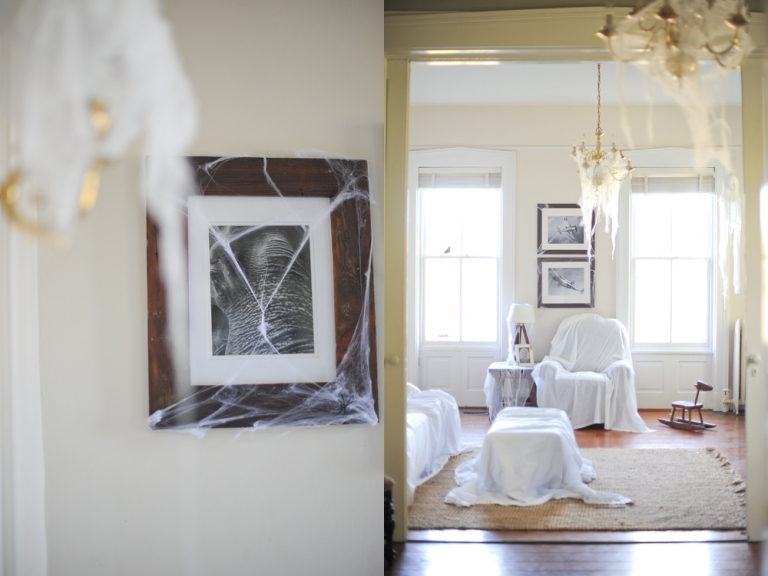 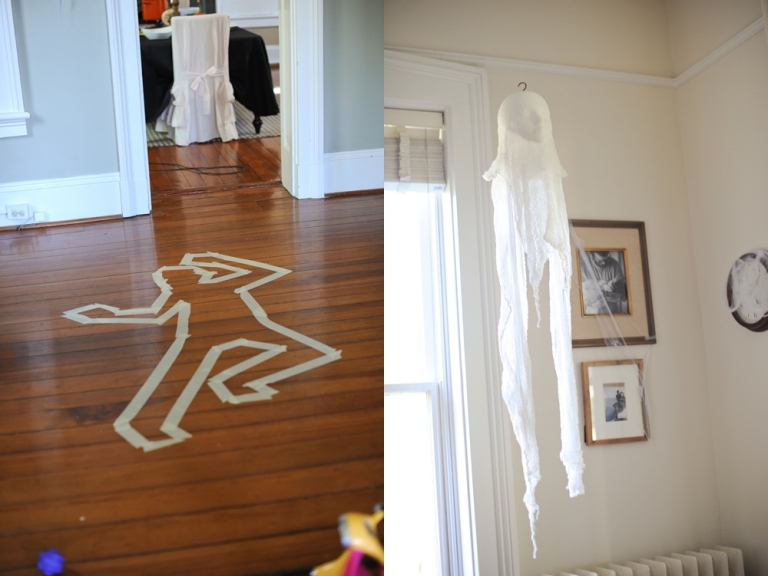 Cheesecloth was purchased in bulk 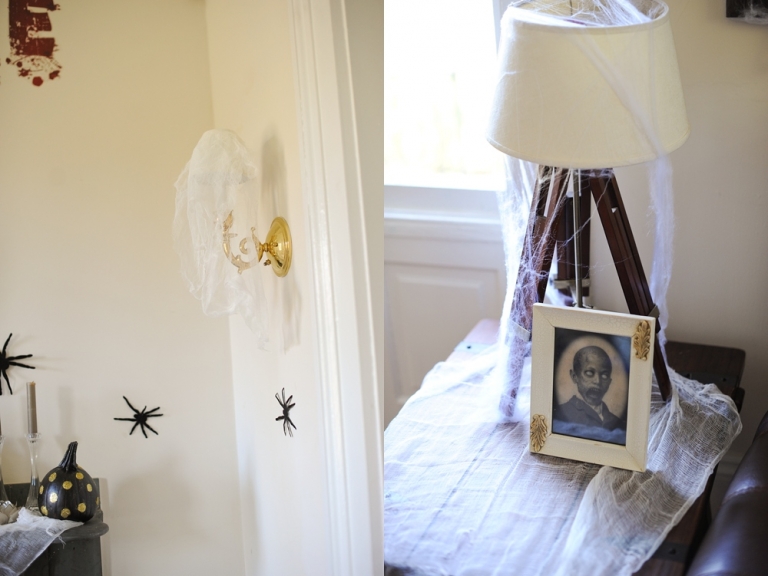 Cheesecloth was my friend this year.  Bought lots, probably the priciest thing and I tore it up for effect. Draped on mantels and light fixtures it was the perfect touch! 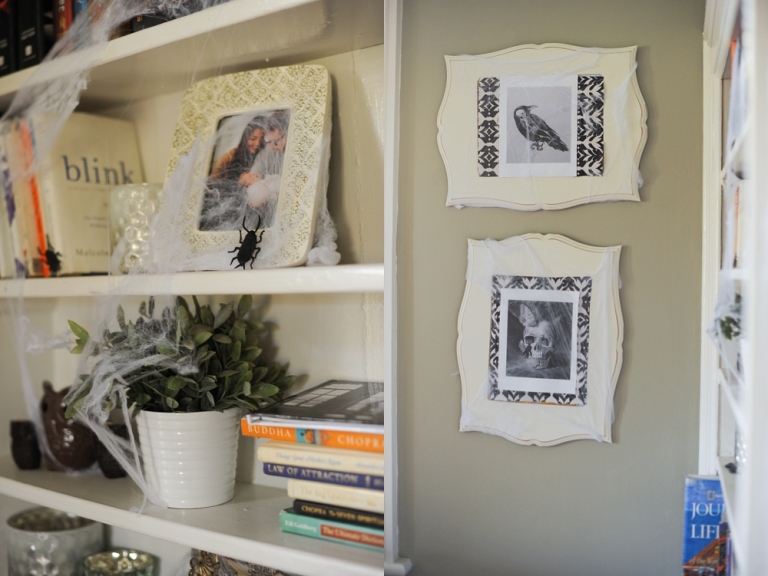 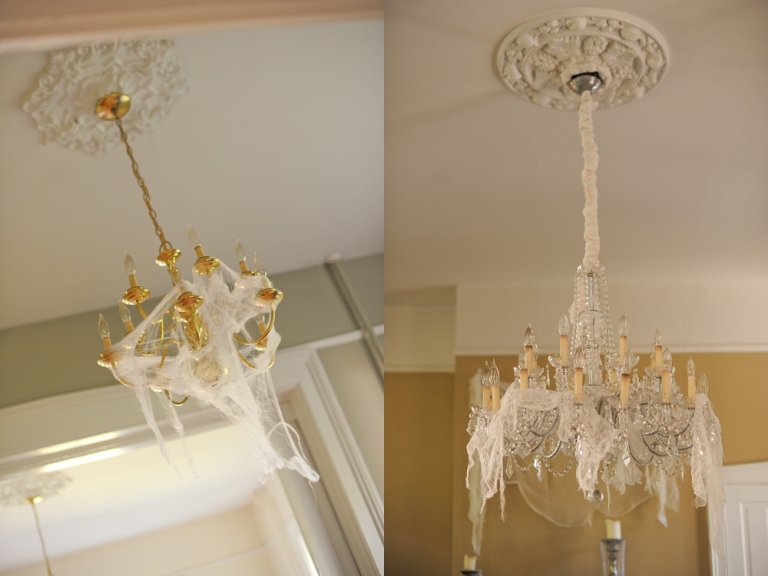 I slacked a little outside, just because I was so focused on the inside.  The black crosses were my favorite though because they were so simple and cheap, just some lumber glued together and spray painted.  The graves were tricky and didnt work out as well as I’d hope, we left them behind when we sold the house 😉 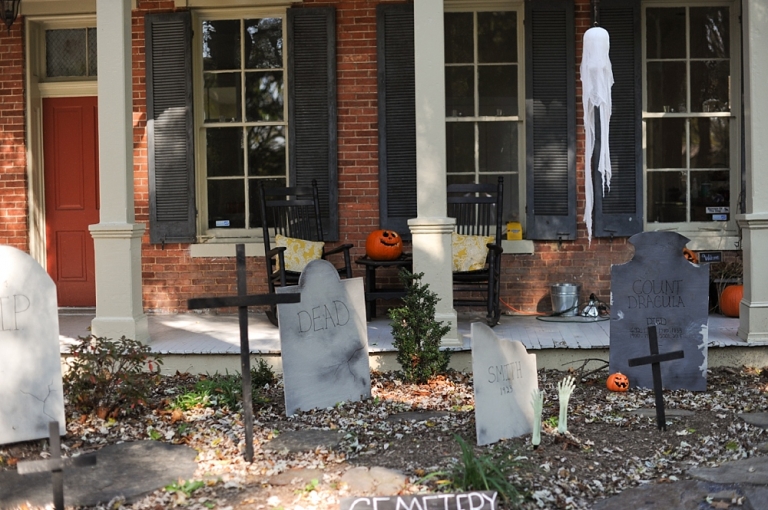 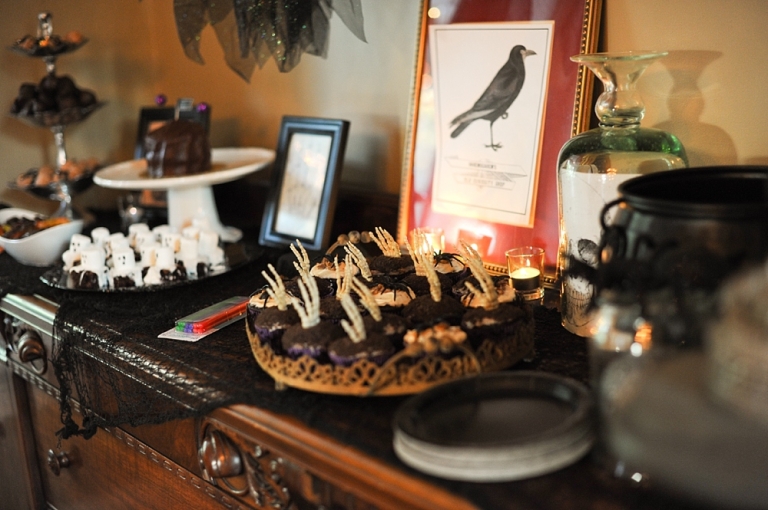 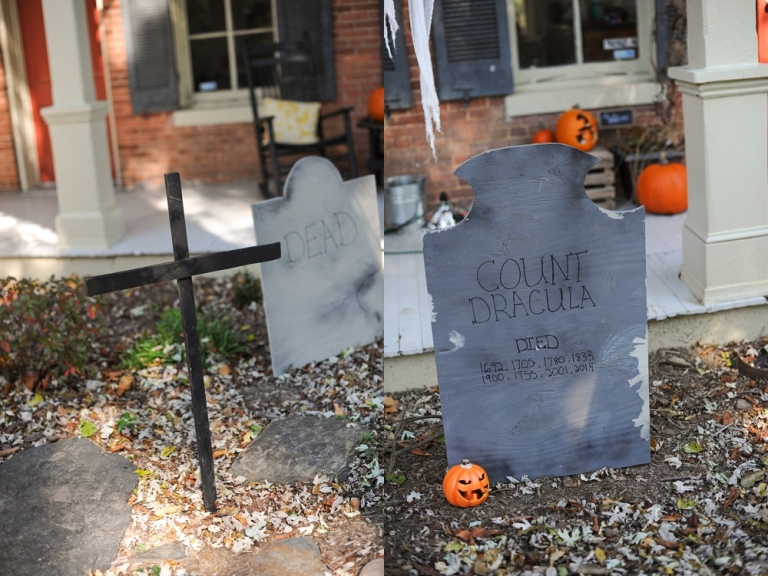 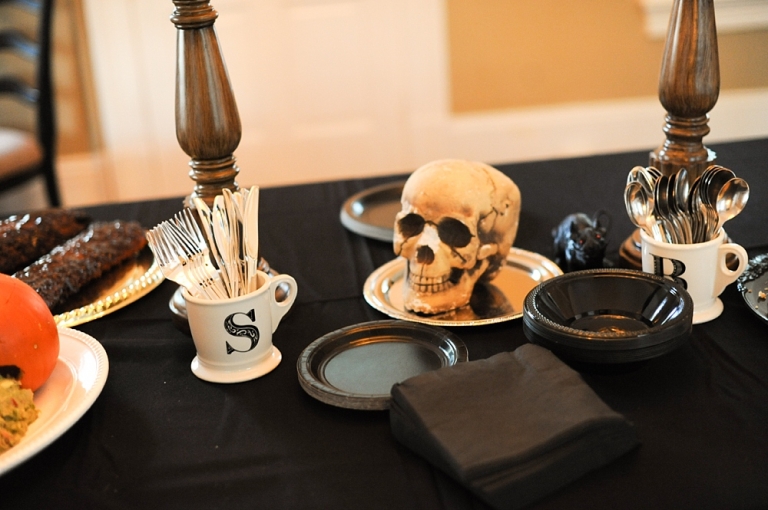 ribs and heart on a platter! 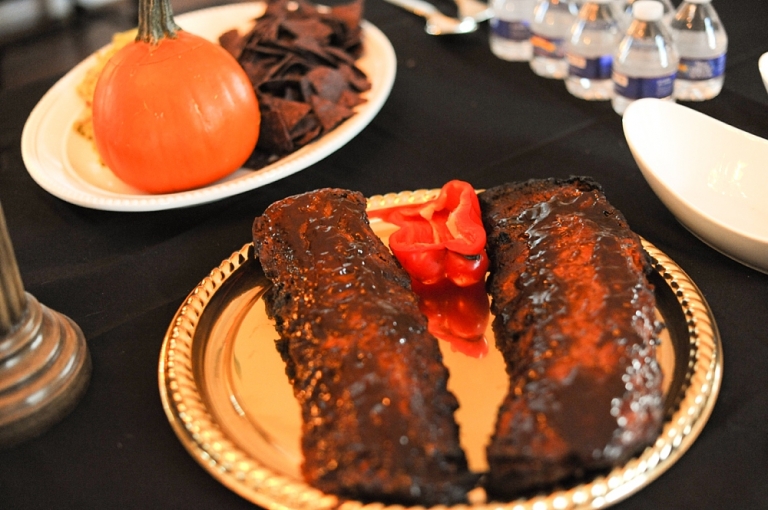 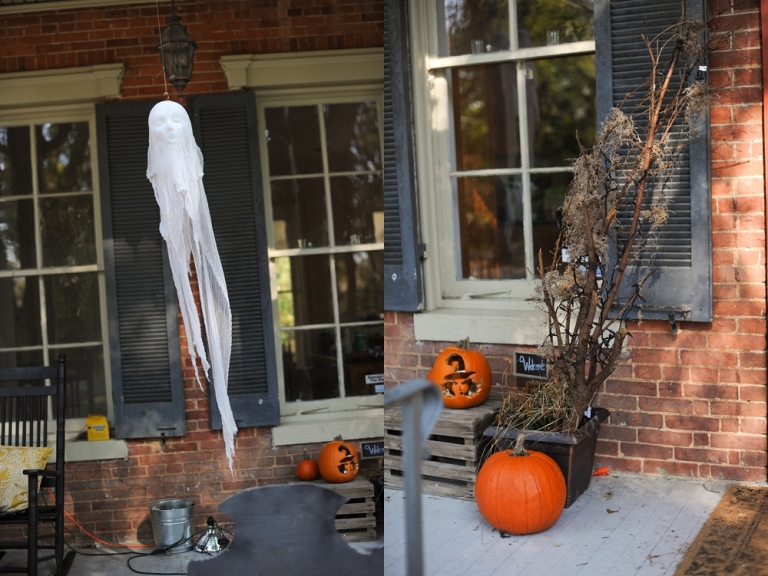 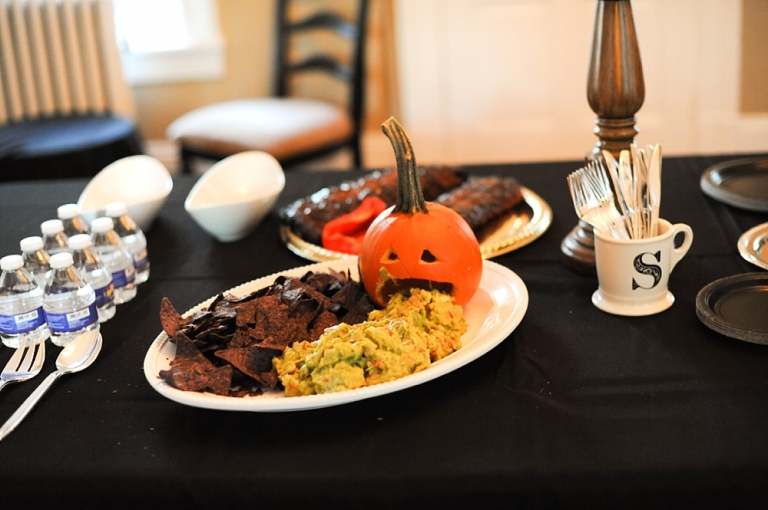 brian was gomez addams, I was morticia and esme was just a little black cat (because I’m cheap and we already had ears!) 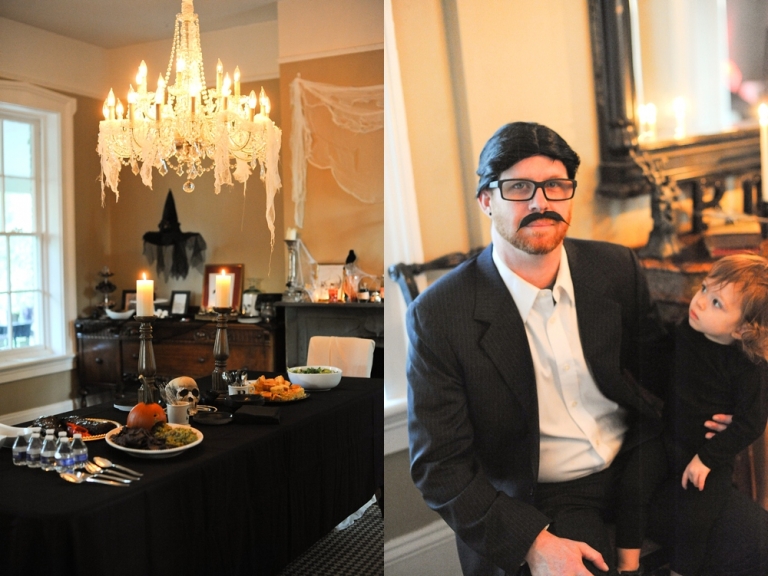 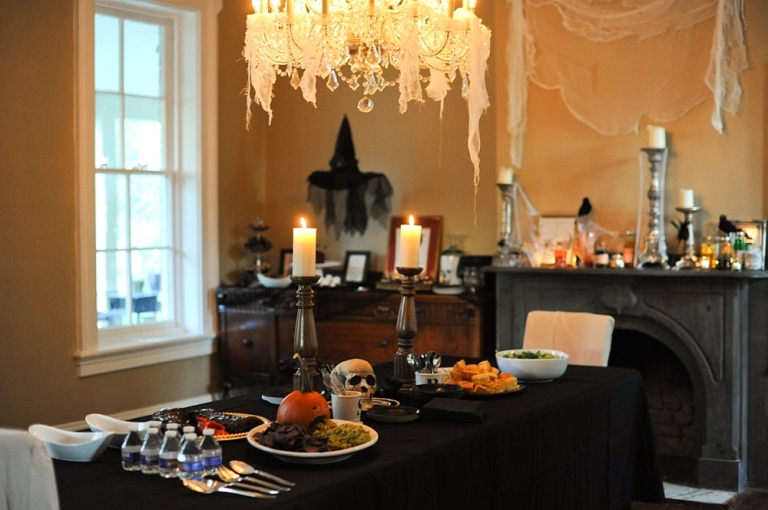 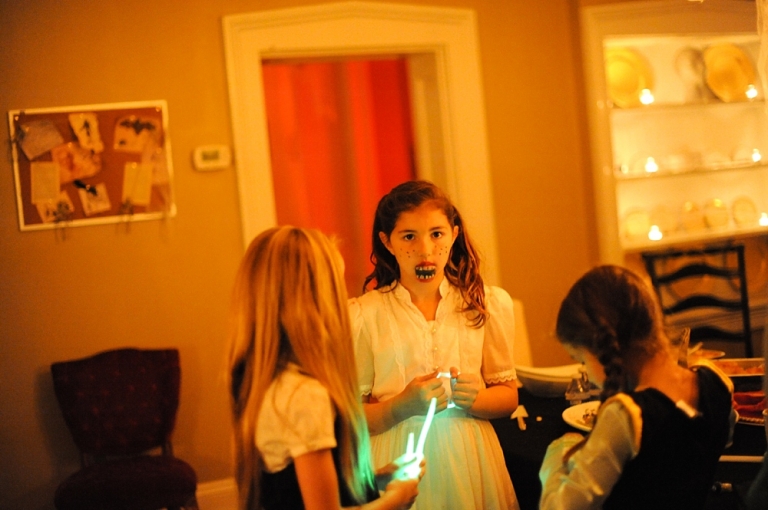 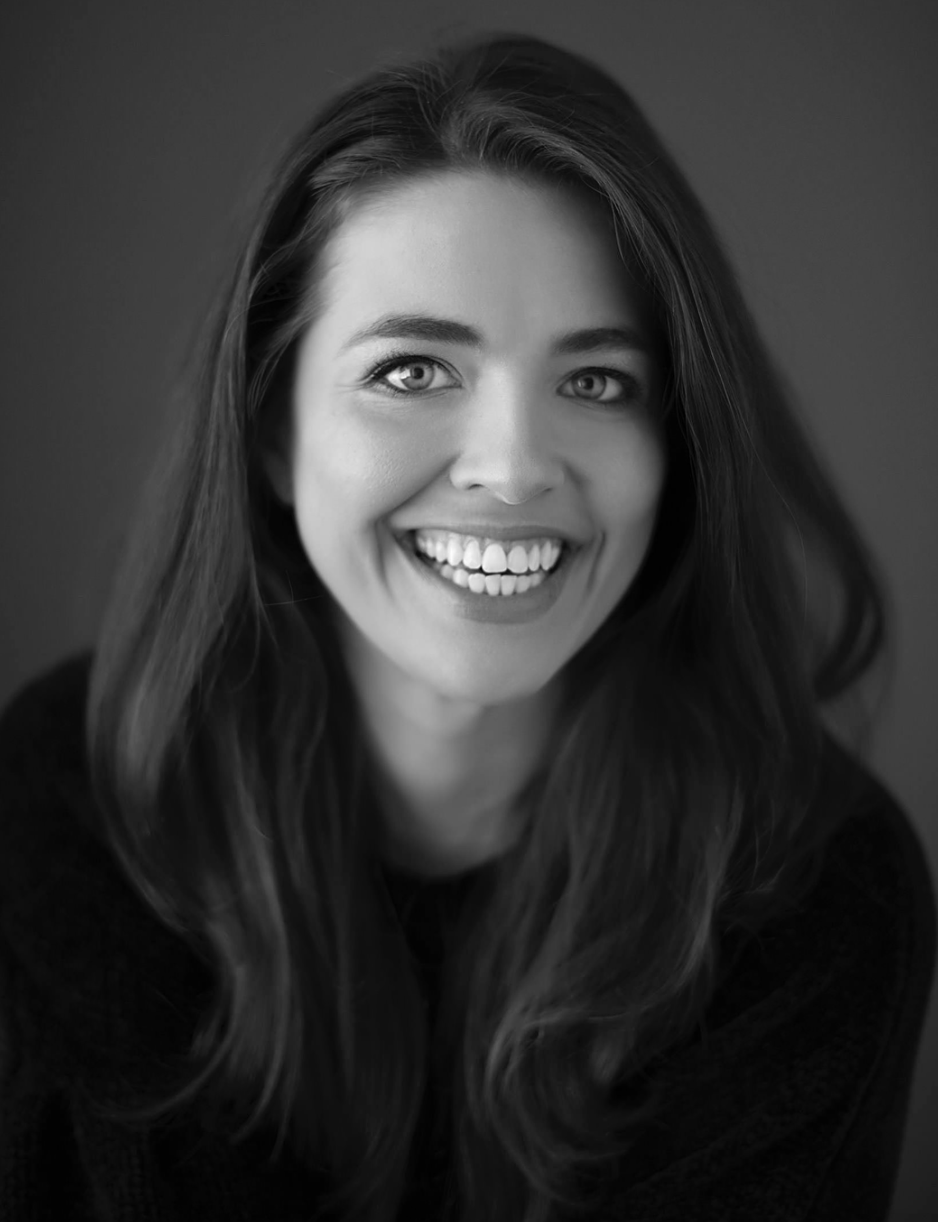 I am a Maryland photographer based in Downtown Frederick and work all over the DC, Maryland & Virginia area. I create timeless and artistic images- specializing in all types of family portraiture. You may also catch me shooting a wedding or event! I have over 10 years of experience photographing professionally and it is my passion to photograph people and document lives.

I enjoy food (eating not cooking!), especially chocolate + coffee, exploring my town and lazy weekends. I'd love to get to know you more!

To contact us now, use the form below or email directly!